At this time it looks like there will be no ice castle this year due to ice conditions.

We’re pretty relaxed round these parts, except those few days of each year when we’re setting up a castle worthy of royalty. You heard that right. Each year, the Eagle River volunteer firefighters and volunteers from the community put in more than 700 hours of hard work to build a palace of ice by cutting nearly 3,000 12-inch-thick ice blocks from a local lake, hauling them to downtown Eagle River and stacking them into place to build the impressive structure you see here.

This popular attraction brings motorists, snowmobilers, locals and visitors hoping to see the massive 20-foot-high structure in all its glory on 116 S Railroad St. Each year brings a different shape, opaqueness and size. The castle is constructed annually (weather permitting) on the weekend closest to the New Year by the Eagle River Volunteer Fire Department. Plan your trip to come see the ice castle before it’s too late.

History of the Ice Castle

The first ice castle began as an addition to the annual “King Winter” festival in 1933. The project was led by Ed Bandow and William Radue (owner of the Pickerel Lake Resort) who would cut the ice from Silver Lake. The first castle was built on the Chicago and Northwestern Railroad property across from current day Moccasin Shop & Gifts.

The next ice castle construction lead by Louis Behlow, didn’t occur until the winter of 1935-36 and was comprised of only 250 blocks of ice. From then on, the tradition and the castle size grew, becoming an annual event for all to enjoy. F.W. Janusch, a Chicago architect and summer resident, took control of designing the ice castle until 1942 with Charles Hanke (owner of the C. H. Hanke Ice Co.) providing the ice.

A photo of the 1940 ice castle shows a multi-level parapet, with American flags flying from one of the towers; a 1942 photo shows an obelisk-shaped ice castle sporting a “V” and a red cross. Another undated photo shows a rounded structure, about 20-feet high, with windows and a door dummied in.

As the war started, construction on the ice castle stopped until 1948 when Hanke built the first post-war ice castle on his front lawn and continued designing the castles until about 1980 when his grandson Jack Thomas took over the responsibility.

While the Hanke’s family designed the castles for decades, the organizers changed hands multiple times. In the 50s and 60s, the Eagle River Lions Club led the project until their focus shifted to the World Championship Snowmobile Derby. And just like a knight in shining armor, the Eagle River Area’s Volunteer Fire Department stepped in to manage the project with Assistant Chief Jack Thomas in the mid-80s. The department continues to follow Jack’s lead, using his Lego®-designed structures as a blueprint.

In recent years, colored floodlights have been added to illuminate the palace at night. A total of 93 floodlights were used in 1997 making for a bright and beautiful palace. The ice castle is “one of the most photographed attractions in our area,” says an Eagle River Area Chamber of Commerce & Visitors Center spokesperson. “I’ll bet there have been a million pictures of people in front of and around the ice castle,” says current Fire Chief Anderson.

The volunteers still use some of the original equipment that Hanke used, including an ice saw and conveyor system used to get the ice blocks from Silver Lake to the pickup truck. According to Thomas, the volunteers used to jack up a model A Ford and used the rear wheel to turn the conveyor. Today, the same conveyor is turned by the hydraulics from a wooden splitter.

On the weekend nearest to the New Year, the ice is scored and cut on Eagle River’s Silver Lake. Then, over 2,300 blocks of 12” x 10” x 20” ice, weighing in at 60-70 pounds each, are removed from the lake. The ice blocks are trucked to the site and the construction – all done by hand – begins.

In addition to all of the volunteer time, costs involved with erecting the ice castle include the need to upgrade and maintain the equipment, replace bulbs, pay for gasoline and much more. So, in order to help keep the tradition alive, many local businesses donate money, as well as in-kind support, providing breakfasts, lunches, cocoa, soups, sandwiches and treats for the volunteers. There is also a donation box and descriptive information at the back of the structure for locals and visitors who want to show their appreciation.

“We want folks to visit our wonderful community, but it is a lot more than that. How can you measure the joy of wide-eyed kids and adults watching the ice being cut and hauled using the old equipment, and volunteers building this ice castle by hand and then stepping back to see this huge, utterly beautiful and artistic ice structure,” says Kim Emerson, Executive Director of the Eagle River Area Chamber of Commerce & Visitors Center.

Depending on the weather, the ice castle normally stands until mid-February, when the remains are taken down. Start your new tradition by planning a trip to see it. 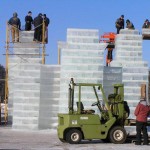 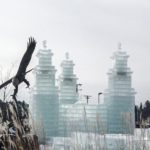